What is Exit Load in a Mutual Fund

Mutual funds are a great investment avenue with the possibility of getting higher returns with low risk. This is mainly because the fund is a mixture of debt and equity with different percentages of both in different categories which diversifies the overall portfolio. Fund managers are trained to do an investment in mutual funds on your behalf and share periodical communications with the investor. But everything comes at a cost. All the asset management companies (AMCs) charge a particular amount of fee from the investors to cover their distribution expenses, operational costs, and other transactional charges. So whenever an investor is planning to enter into a mutual fund or wants to exit from a specific scheme, will incur some expenses. The two main charges are the entry load and the exit load in mutual funds.

What is Exit Load?

The exit load, as the name suggests, is to be paid by investors when the redemption of the investment in a mutual fund is made before the stipulated period. It is levied by mutual fund companies to cover the expenses incurred by the AMCs in that investment. Still, there are some funds on which no exit load is charged. These funds fall in the category of no-load funds.

Sometimes funds have almost the same or flat exit load. And sometimes, they have a tiered structure ie; higher loads for early withdrawals and then keeps on decreasing the longer you stay invested, after a point, it vanishes. Some debt funds that follow an accrual strategy have higher exit loads and as per these strategy calls for patience in investing. It charges 3% for withdrawals before 12 months, 2% for withdrawals before 24 months, 1% for withdrawals before 36 months, and no charges after that. Whereas in the case of equity funds typically charges an exit load of 1% if the invested money is redeemed before a year of investment.

Suppose an investor invested Rs. 30,000 in a mutual fund in January 2017. According to the scheme it has an exit load of 1% if redeemed before 1 year. The NAV is Rs. 100 therefore, the investor has 300 units. Now, if the investor wants to redeem the units after 4 months, i.e. in May 2017. In such a case, the investor will be paying an exit load as per the calculation: 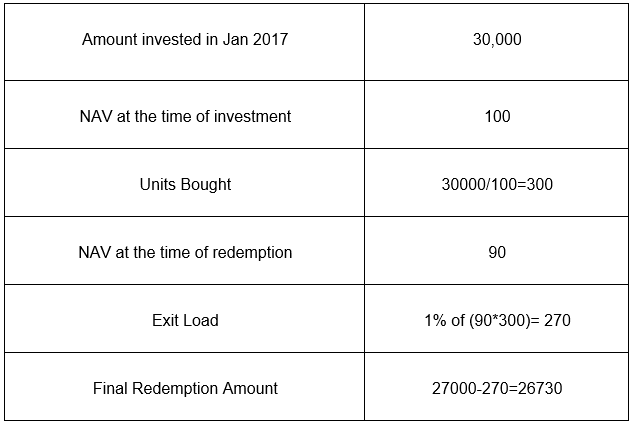 Exit load on a mutual fund is an important factor for an investor to be aware of while investing. You should be meticulous before investing in a Mutual Fund scheme as it helps to estimate the returns once all the other expenses are settled. No investor would like to get penalized in the form of an exit load unknowingly. Exit Load can take a toll on you and your planned investments. Thus, it can be avoided if you plan your redemption of mutual fund units judiciously.

There different exit load rates for different mutual funds, it is a defined percentage on the NAV of the mutual funds at the time of purchase.

Exit load is primarily calculated when one has achieved their investment goal or when the mutual fund investment has reached the maturity period.

Yes, there is an entry load on mutual funds that is charged when one enters the scheme or joins as an investor.

If the Net Asset Value (NAV) and Public offer Price (POP) is different for the same mutual fund, then there’s a load price added to the POP.

The biggest advantage of buying a load fund is that you get assistance from experts who conduct research and check the financial trends before taking investment decisions on your behalf.

Want to continue the conversation?

Speak to our expert in

Would you like to continue with some arbitrary task?